The Insecure Writer and Perseverance

Because I don't know if I have the perseverance to survive as a writer.*


In a change from my usual IWSG post, today’s message will be one of support. Let’s be honest, unless you’re one of those authors who dashes out publishable stories every three months, you spend a loooong time staring at your unfinished manuscript, not knowing whether anyone will to care to read it when you’re finished. And when the finish line is so far away, it’s easy to get discouraged and quit.

In my opinion, successful writers are the ones who persevere over the long haul. They don’t take no for an answer. They just keep going, no matter what.

Melissa’s been a member of IWSG for over three years, starting out as #180 on Alex’s list and slowly inching her way up that list by posting every first Wednesday of the month, even while others gave up and dropped out. Since I’m a scientist, let me show you her journey in graphical form. 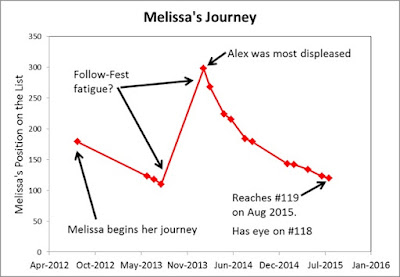 As you can see, she experienced a slight setback near the end of 2013 (fatigue from Follow-Fest, no doubt), but did she give up? No, she jumped back in with a vengeance and now she’s worked her way back to #119. And she has her sights set on #118, so you better watch out, SittieCates.

So let Melissa be an example to you all. Perseverance works! It’s also a big reason why she just finished publishing her second book, Precious Atonement

So head on over to her blog and leave a comment. If you’re behind her on the list, let her know you’re coming after her. And if you’re above her, a little trash talking is always good for the soul.


*To be honest, I’m not really insecure on this topic. I have an almost child-like ability to ignore facts. All I need is a good night’s sleep and all the doubts I experienced the day before disappear. I’m in this for the long haul, because when you’re a slow writer like me, you have to be.

**And lest you think I’m some kind of stalker, let be it known that Melissa signs her IWSG post comments with her current position on the list, so it was easy enough to collect the above data. :)