If you read my last post, then you know this has been a sucky week for me and my family.  A pall has descended on our house and it's not likely to leave anytime soon. I can't wait for the week to be over.

A month and a half ago, I was looking forward to my first writing workshop, which is scheduled for next Friday and Saturday.  Right now, I could care less.  I hope my mood will improve during the next week, but I'm not looking forward to leaving my wife alone (with the kids) for a couple of days.

Should You Cut That Character?

Ten Tips for How to Behave at a Writers Conference

Connecting Your Characters to Settings in Your Novel

Why You Need To Write a Series - FUNNY! 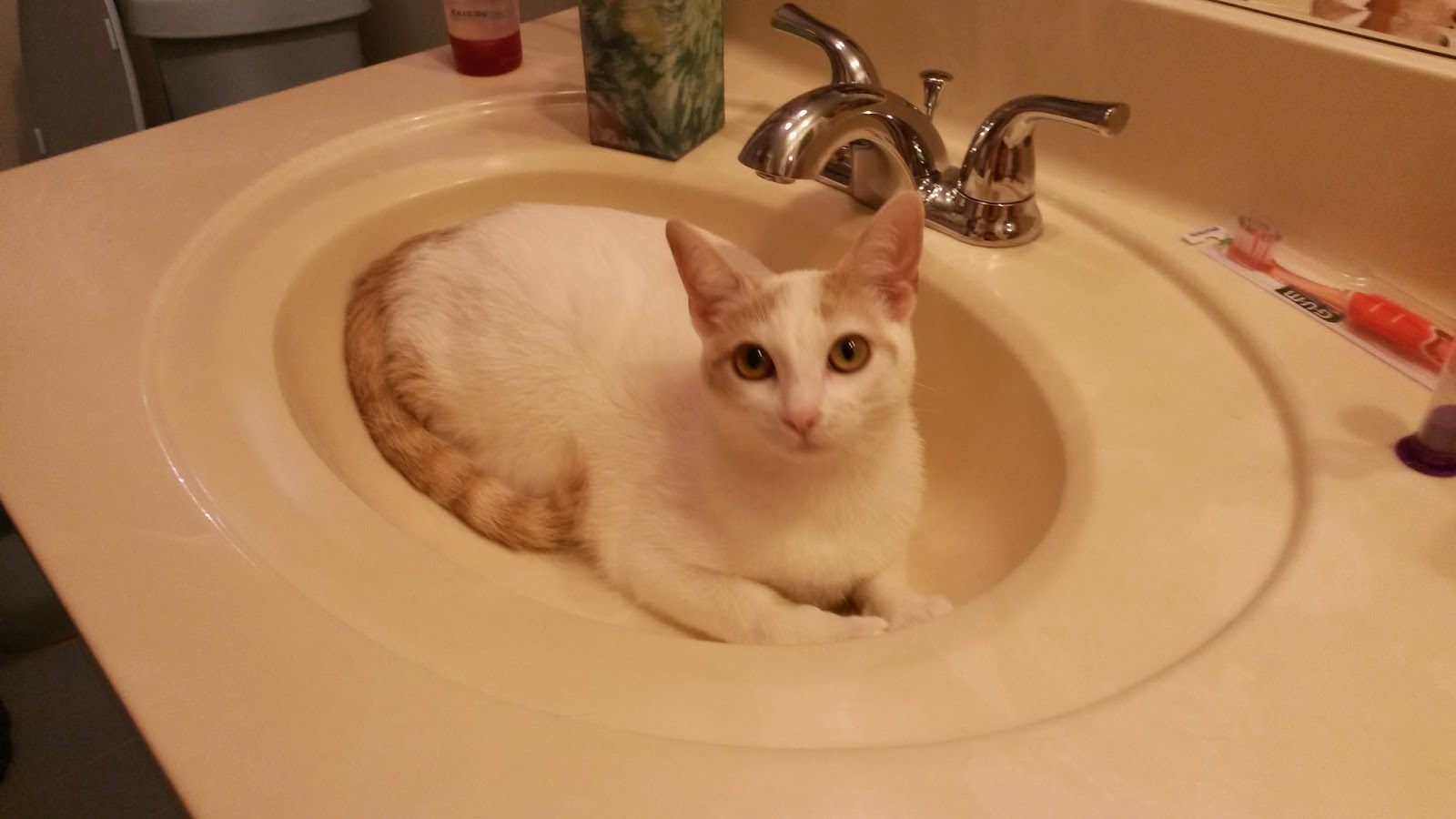 A few weeks ago, I mentioned that one of our cats, an eighteen month old kitten by the name of Pebbles, was fighting an illness.    After five weeks of ups and downs, of good news followed by bad, of days where she looked healthy and days when she didn't, Pebble's story finally came to a close last night.

She was my wife's favorite cat.  The one who was most likely to purr when rubbed.  One of the sweetest cats I've ever had.

Goodbye Pebbles.  You will be sorely missed.
Posted by Chemist Ken at 12:15 PM 10 comments:

Email ThisBlogThis!Share to TwitterShare to FacebookShare to Pinterest
Labels: Pebbles

Didn't feel much like writing or posting this week, as those of you who dropped by on Wednesday expecting my normal post probably noticed.  But here are a couple of writing links to keep you entertained until next week.

Have a great weekend.


How Has Self-Publishing Changed In The Last 2 Years?

Showing Settings through the Eyes of Your Characters

Writer Drops a Toad on Agent

As far as our sick cat is concerned, the news is mixed.  She's been slowly improving the past two weeks, although she's still not back to the way she was before all this started.  My wife took her in to the vet today, and although her temperature had dropped by half a degree (yay!), the results from her blood tests remained about the same.  This means she probably has a chronic virus (possibly FIP, the one that worried us from the beginning), but it also means her immune system is doing a good job holding it at bay.  As long as her body can keep fighting it off, she may have lots of time left on this planet.

Basically, it's one day at a time, just like it is for writers.

Have a great weekend!
ChemistKen


What's Their Story? Discovering the Front Story of Your Non-Point of View Characters

Surviving The Game (Writing As Business)

Why Every 1st Novel Should Be a Ghost Story

Marketing In and Outside The Box

Grant of Rights … or Wrongs?

When A Scene Isn’t Working

3 Techniques to Keep in Mind When Setting the Stage

This week I came across this post on David Farland's blog about the relative importance of characters. The point of the post was simple. Although many experts may harp on how characters are the most important part of a story, that’s not always true.

I’ve always been a “plot over character” kind of guy. It’s not that I think character is unimportant, but I’ve generally found it’s the plot that allows the reader to understand and connect to that character in the first place. You can assign all sorts of eccentricities and habits and backstory to a character, but if the plot doesn’t make use of those traits, then who cares?

Take Harry Potter, for example. In the first book of the series we learn that Harry, despite having lost his parents and being forced to live with the Dursleys, is a good guy. Yay! He’s also fiercely loyal to his friends. Yay again! And he’s also kind of a boring, stereotypical character. Er, yay?

But that last bit is okay, because it’s the plot that carries us along. When we watch him struggle his way through the story, dealing with the eccentricities of the wizardring world, trying to pass his courses, and working to foil Voldermort’s plans, we begin to root for him, despite the fact that he’s a stereotype. And let’s be honest about it; Harry’s character arc was about as flat as it’s possible to be for someone who’s just learned they’re a wizard. But by the time the book is over, we’re in love with him anyway. Why? Because of the plot and how he dealt with the situations thrown his way.

I’m not trying to convert any “character over plot” readers (and writers) out there. There are plenty of great character driven books on the shelves. I was just happy to see someone take the other side of the argument for once.
Posted by Chemist Ken at 9:52 AM 6 comments:

It's Friday, which means the kids are almost done with their first week of school. They handled it better than I expected, especially since they had been whining almost constantly the last couple of weeks about how short the summer was. Fall is my favorite time of the year, and I often find this translates into more productive writing on my part. We'll see.

In any case, have a great weekend.

The Nightmare of Updating Backmatter - SOLVED

How to Pitch Your Self-Published Book to an Agent

Waiting For A Story To Get Going

The Insecure Writer And Not Knowing The Future

Because I don't know the future.

I wasn’t planning on posting today, figuring I would just skip a week, but then I remembered it was ISWG Wednesday. And since I didn’t wish to lose my place on Alex’s list (I’m currently at #37), I thought I’d better get my butt in the chair and write.

Those of you who saw last week’s post know one of my cats is sick. She seems to have gotten somewhat better, but it’s unclear whether that’s temporary or a sign of things to come. So basically, the family and I are just going to have to wait, one day at a time, trying to remain optimistic, until we know for sure.

It occurred to me that it’s much the same way for newbie authors. We pin our hopes and dreams on the idea that one day we’ll be good enough at this writing stuff to be published AND that people will actually consider buying our book, but we have no assurances this will ever happen. We just have to keep the faith while experiencing the ups and downs of the writing journey.

Easier said than done. But you already know that.

If only I had a crystal ball.

ChemistKen
Posted by Chemist Ken at 11:50 AM 26 comments: