Because I don't feel as secure about the Internet as I did before.

Don't get me wrong.  I love the Internet, especially now that I have a smart phone.  But I've learned I shouldn't get too used to having it around.  My family and I were on vacation up in northern Michigan this last week, and while I enjoyed the time off, I also discovered that Verizon doesn't cover that region well at all.  I also discovered that just because restaurants say they have wi-fi doesn't mean it works.  Needless to say, I had only sporadic access to the Net.

Now some would say this is not necessarily a bad thing when you're on vacation. But when you have a book review scheduled on the SherAHart blog  in the middle of that vacation, and you can't get online long enough to find out if the post published correctly (which it didn't), it's not a good thing either.

So even though my phone has allowed me to become closer to the Internet, it's also shown me what my world would be like if I lost that connection.  Especially once I begin publishing books.  Kind of scary.

Anyway, I'm reposting the book review here as part of my IWSG post.  If you enjoy YA fantasy, check it out.

Hello! Ken Rahmoeller here with a review of Messenger, a YA fantasy written by Scott Rhine.  First, let's take a look at the book blurb. 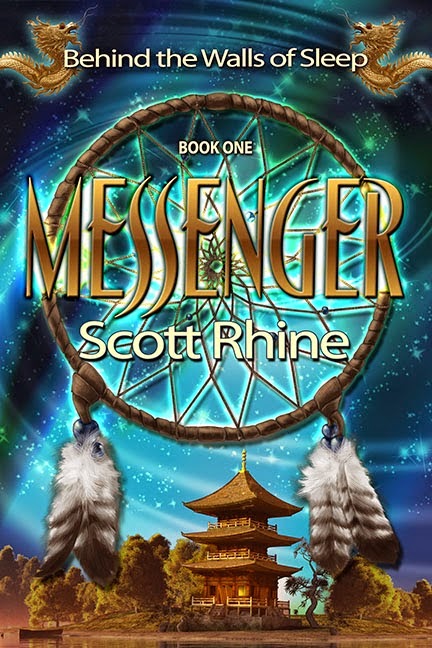 About the book: When we close our eyes at night, we all see the same ancient place.  Exploring Astra is like living a video game. Tomorrow, I'm going goblin-tipping with some of the other wizards. The first rule of being a dream wizard is "no photos."  You don't want the bad guys finding you where you have no powers.  The waking world sucks.


Since Mom went to prison, the Nevada foster system sent me to Minnesota to meet an Uncle Joe I never knew I had.  Snow loses its charm after five days. Only music and the dreams make my life bearable.

The weird thing is that elements of the worlds are bleeding into each other.  Someone is trying to kill me, and I'm not sure who: the criminal underworld, the elves, or the crazy wizard causing these freaky storms.

After a car accident leaves his younger brother dead and sends his mother to jail, fourteen-year-old Daniel discovers he is one of those rare people with the ability to travel to an alternate world when he sleeps.  Forced to spend his days with an adopted family that could be described as a midwesternized version of the Dursleys (ala Harry Potter), Daniel looks forward to his nights when he can escape his mundane life and travel to this strange new world in pursuit of action and adventure.

The first half of the story plays out much as you’d expect, with most of the story focusing on his adventures in the dream world, interspersed with short scenes demonstrating how crappy his life is during the day. Once Daniel comes up to speed with his new surroundings, he joins a band of adventurers (other people with the same dreamwalking ability) and embarks on quests to build up his experience and bank account. Anyone who has played MMORPGs (Massively Multiplayer Online Role Playing Games) will feel right at home with this book.  Plenty of unusual things are happening in this alternate world—mysterious storms, political intrigue, unexplained deaths—and it appears that Daniel will be the hero destined to set things right.

But then the story throws you a curve.  His adoptive family stops acting so Dursleyish, Daniel discovers he has a knack for music, and suddenly his day life becomes just as important to the story as his nighttime excursions, especially as he struggles to keep the two worlds from affecting each other.

What I liked:  The writing was good and tension continued to build throughout the story.  I found the world imaginative and fun to explore, and it was refreshing to see a story that utilized folklore from less used sources (Native American, for example) instead of depending entirely on European mythology.  Also, in these kinds of stories it’s usually the lessons the main character learns in the alternate world that teach him how to behave in real life.  By the time you get to the second half of the book, it’s his real life experiences that are teaching him how to behave in the alternate world.  A nice twist.

What I didn’t like:  The story felt a little disjointed at the beginning, although it smoothed out by the end of the first chapter, so don’t base your opinion of the book on the early pages.  And Daniel seemed to accept this whole dream world concept much too easily for my tastes.  I suspect the author just wanted to get on with the adventure, but a little skepticism on Daniel’s part at the beginning would have seemed more realistic to me and could have revealed more about his character.

I also felt some of the rules explaining how or why various things worked in the dream world could have been described in more detail.  I’m not asking for infodumps, but there were times when complex concepts were summed up in a single sentence that might leave some readers confused.  It’s not necessary to have played role playing games to follow some of these explanations, but it helps.

To be honest, my biggest disappointment was with the ending.  I’m not going to give away any spoilers here, but after spending most of the book setting up all sorts of mysteries for Daniel to solve and introducing us to the bad guy who grows ever more powerful over the course of the book, the story just kind of ends, leaving most of these issues unresolved.  Apparently, some of these plotlines are addressed in the next book, but I would have liked more of them resolved in this book.

Still, I enjoyed the book, which is as much about Daniel growing up as it is about his adventures in a strange world. I’m giving Messenger a 4 out of 5, knocking off a half star because of the ending.

I received a free copy of the book in exchange for an  honest review.