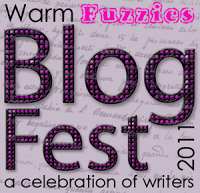 I almost didn’t respond to this week’s Warm Fuzzies assignment – to describe the worst thing or things you’ve ever done to your MC. As I’m still working on my very first book, and as my MC’s journey is still ongoing, I didn’t think I had much to talk about. But after thinking back over what my MC has been going through so far, I think I can describe his torture in one word.

Insecurity over whether anyone is ever going to accept him in his new job.

Insecurity about his age and whether he’s too young for the task that gets dropped into his lap.

Insecurity that someone will discover his dark secret.

Yep. That’s the theme all right. Although perhaps a better word would be fear. Fear of doing the wrong thing. Fear of failure. Fear of discovery.

Hmmm... Sounds familiar, somehow. Makes me wonder if the MC is really just me in wizard’s robes.
Posted by Chemist Ken at 8:34 AM