The Insecure Writer and Never Finishing

Because I worry I may never actually finish a story.

Not because I plan on giving up writing anytime soon. I’m stubborn enough to keep plugging away at this writing stuff until I get it right. But I’ve just started my third story and I haven’t finished the first two yet. My first story was fan fiction (I bet you can guess which one) and I worked on it for over five years before deciding I should also work on something I could eventually sell. So a year ago, I started work on a MG fantasy, but after spinning my wheels for almost a year with the plot, I decided to shove the MG story to the back burner and begin yet another story. Fantasy, of course.

So here I am, working on or thinking about three different stories and hoping that at least one of them gets finished before the decade ends. Did I also mention I’m a slow writer?

Sounds utterly disorganized, right? Yep, but that’s my style. I've never been happy working on just one project at a time. I read five or six books simultaneously, choosing to read whichever one I feel like at the moment. Even when I make myself stick to writing one story, I jump around, working on whichever chapter appeals to me on that particular day.

The point is, I hope I don’t end up becoming one of those writers who has a dozen partially finished stories stored on their hard drive and no completed ones to show the world.

In keeping with this topic, I know someone who no longer has to worry about finishing her book -- because she's already done it! This week, fellow ISWG member Melissa Maygrove revealed the cover to her debut book, Come Back. If you want to support one of your fellow Insecure Writers, hop on over to her blog and show your support.

And one day, maybe you’ll be able to do the same thing for me....

Sometimes a single choice alters the course of a person's life forever. 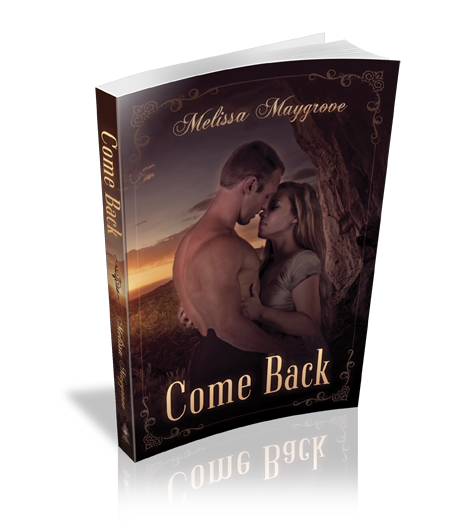 Rebecca Garvey had the promise of a California future dreams are made of, until the wagon train her family was traveling with left her behind. Now she’s slowly dying in the wilderness, abandoned and stripped of her self-worth. Once the shock of her desertion turns to embittered despair, she doesn’t want to be found. Then a handsome stranger challenges her convictions and changes her mind.

Seth Emerson knows exactly what he wants. Working to save for a cattle ranch of his own keeps him busy and keeps his pain buried. Rescuing a stubborn woman from the hills of New Mexico Territory isn’t part of his plan—but she’s exactly what he needs.

Seth and Rebecca set off on a risky journey and a quest for truth, each healing the other’s love-starved soul along the way. Will they give in to their growing attraction?  Or will they honor their commitments when Seth returns Rebecca to civilization... and her betrothed?