The Dragon of the Month Club: A Review 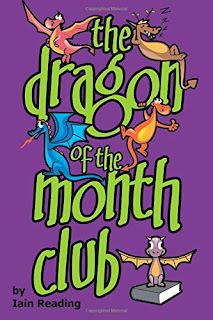 The Dragon Of The Month Club is the exciting first installment in a new book series that tells the story of Ayana Fall and Tyler Travers, two best friends who stumble across an extraordinarily magical book and soon find themselves enrolled as members of a very special and exclusive club - The Dragon of the Month Club.

In the back shelves of the local library, Ayana Fall and Tyler Travers find a book that not only lets them conjure a dragon, but also allows them to become members of the Dragon of the Month Club. Now that they're members, they receive instructions for conjuring a different type of dragon on the 13th of every month.

The book warns of the dangers of not performing the spells correctly, but that doesn’t stop our heroes from trying out as many spells as they can.Of course, one of the spells eventually backfires and the pair wind up in a strange, yet eerily familiar land with pop-up forests, oceans, deserts, waterfalls, and towering plateaus. And their only chance of returning home involves finding Professor Mobius, a genius who lives in a tower on the other side of the land. Together, Ayana and Tyler must stay calm and keep their wits about them as they journey through a land filled with many wonders and dangers.

Things I liked:
Despite the initial impression that this book was simply another story about dragons, it was more about Ayana and Tyler’s adventures as they trekked through the mysterious land in their quest to find a way home. Dragons did play a role helping out here and there, but mostly it was about the two heroes figuring their own way out of trouble.

Having Ayana and Tyler interact with Sherlock Holmes and Dr. Watson was a refreshing twist I didn’t see coming. Sherlock Holmes, you ask? You’ll just have to read the book.


Things I didn’t like:
Although the writing style seemed to be aimed toward (early?) middle schoolers (word choice; simplistic, on-the-nose type dialogue), many of the references and terms which appear later in the book would probably require older readers to appreciate, so I’m not sure if this story should be considered middle grade or not.

I was also quite disappointed with the end of the story—mostly because there wasn’t one. You’ll have to read the next book in the series (not yet published) to find out what happens. If this kind of thing bothers you, it might be better to wait until the next book is out before you buy this one. You’ve been warned!

I received a free copy of the book in exchange for an  honest review.