I came across a Dilbert cartoon today that I thought would be appreciated by the writers among us. I can't post the comic directly because of copyright restrictions, but the following link will take you right to the strip.  I'll wait here while you read it.


At some point, all writers have to deal with the question of whether or not to add DRM to their ebooks. As I have yet to finish my first book, I don't have to worry about piracy... yet.

But one day I will. I promise.


Someone who does have to worry about such things is Alex Cavanaugh, founder of the Insecure Writers Support Group.  His third book, CassaStorm, has just been released.  Those of you into science fiction should hop on over to your favorite bookstore and check it out.  Congratulations, Alex. 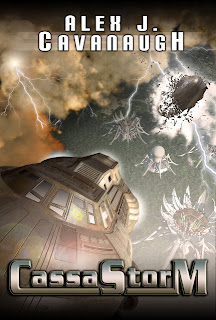 A storm gathers across the galaxy…


Commanding the Cassan base on Tgren, Byron thought he’d put the days of battle behind him. As a galaxy-wide war encroaches upon the desert planet, Byron’s ideal life is threatened and he’s caught between the Tgrens and the Cassans.

After enemy ships attack the desert planet, Byron discovers another battle within his own family. The declaration of war between all ten races triggers nightmares in his son, threatening to destroy the boy’s mind.

Meanwhile the ancient alien ship is transmitting a code that might signal the end of all life in the galaxy. And the mysterious probe that almost destroyed Tgren twenty years ago could return. As his world begins to crumble, Byron suspects a connection. The storm is about to break, and Byron is caught in the middle…