At Least My Garden Is Coming Along Nicely

Back in March, I showed you a picture of my garden in all its post-winter messiness glory and discussed how gardening is much like writing a book. Here’s what the garden looks like now. 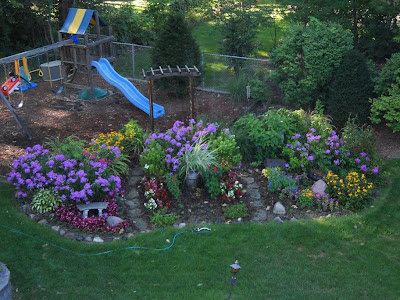 Considering the heat and lack of rain, I’m relatively pleased with the garden, although there should be a good deal more yellow in the photograph. Unfortunately, we live next to a *&^$#@ woodchuck who insists on eating every marigold the instant it flowers.

I only wish my story could undergo such a dramatic metamorphosis in just four months.

I’m happy to say I just finished a rewrite of my third chapter and sent it out to my CP. I’m unhappy to say I spent three full weeks doing the rewrite. Arggg! Where did the time go? I suppose three weeks wouldn't have been so bad if the chapter had turned out nice and polished, but it didn’t. The only reason I stopped at three weeks was because I was so sick of staring at that chapter, I knew there would be no further improvements until I had spent a month or two away from it. So I just sent it off to my CP as is and let her deal with it. (Sorry, Sheryl)

Anyway, I’m moved on to the next chapter. But before I open the file, I plan on staring at the picture of my garden for a while and thinking happy thoughts.
Posted by Chemist Ken at 2:45 PM