Dianne Salerni on What She's Learned During Her Writing Journey

I'm delighted to have Dianne Salermi as my guest today.  So without further ado, I'll hand the microphone over to her.

First of all, I want to thank Ken for giving me this opportunity to write a guest post in celebration of my January release of The Inquisitor’s Mark, the second book in my Eighth Day series. He asked me to talk about what I’ve learned during my journey as a writer.

Since 2009, I’ve written 5 books that are either published or under contract. I’ve written 2 manuscripts that have (so far) received only rejections.  There are 3 more that have not (yet) had the opportunity to go on submission. I count at least 3 that were abandoned halfway through – although there are plenty more that were aborted before I wrote more than a couple chapters.

What have I learned? Mostly, I’ve learned to understand myself as a writer. The better I know my own process, the easier it is to handle the stress, anxiety, and insecurities that come along with the job. (And the less time I’ll waste trying to adopt other people’s styles.)

Some of the things I’ve learned to accept:

1. First Drafts Come Better After Dark – For whatever reason, late night is the best time for me to write new words. That’s when the Muse shows up for work and the Internal Critic quits for the day. I’ve finally learned to stop fighting this preference. I do all my blogging, email, revisions, and promotions in the daytime and don’t even bother to open a blank page until evening.

2. I Hate Every Project in the Middle – There comes a point about 1/3 into every first draft when I’m convinced it’s the stupidest thing I’ve ever written. It’s boring. It’s unmarketable. Once in awhile, I’m correct on this, but a lot of the time, it’s just temporary. During the time when I hate the manuscript, I put it aside and work on something else. If the story is meant to be, it will call me back.

3. I Panic at Every Revision Letter – Every time I open an editorial letter, I go into a full blown panic attack. My initial instinct is to assume I can’t possibly do whatever the editor wants me to do. But in the end, I’ve always managed to satisfy my editors, and I’ve never regretted a single change. Every book has turned out better for an editor’s input and guidance. So if I have to run around the house in agitation, cry, or breathe into a paper bag, I just get it out of my system and then get down to business.

4. Walking Away is a Good Thing – I tend to be very stubborn, and when I’m stuck, I want to keep chewing on the problem until I have it solved. But the answer will often come while I’m reading a book for pleasure – usually something totally unrelated to my project. It’s really hard to close the document and pick up a book, but I’m getting better at it.

5. If You Have to Kill a Darling, Write a New One – Sometimes you have to cut the things you love: A favorite scene, a witty line of dialogue (which is usually not as funny as you think it is) … Over the years, I’ve gotten better at deleting those darlings without regret. I just make up my mind to replace them with something I like even better.

6. I Learn from False Starts and Abandoned Projects – No writing is ever wasted. Whether I quit the project after a page, a chapter, or 50,000 words, I learned something in the writing. Often, I learned what doesn’t work, and that’s as valuable a lesson as learning what does work!

7. To Thy Own Process Be True – It’s great that some authors have a fool-proof outlining method, use Scrivener, or write 1000 words per day without fail. That’s just never going to be me, and I’m happier for realizing it.


Thanks, Dianne.  I still have trouble with number 5.  I rarely delete my darlings.  I just cut and paste them into a new document for later use.  At least that's what I tell myself.

In the meantime, I suggest  all of you pop on over to Amazon and check out Dianne's books. Eighth Day is the kind of book I'd like to write one day. 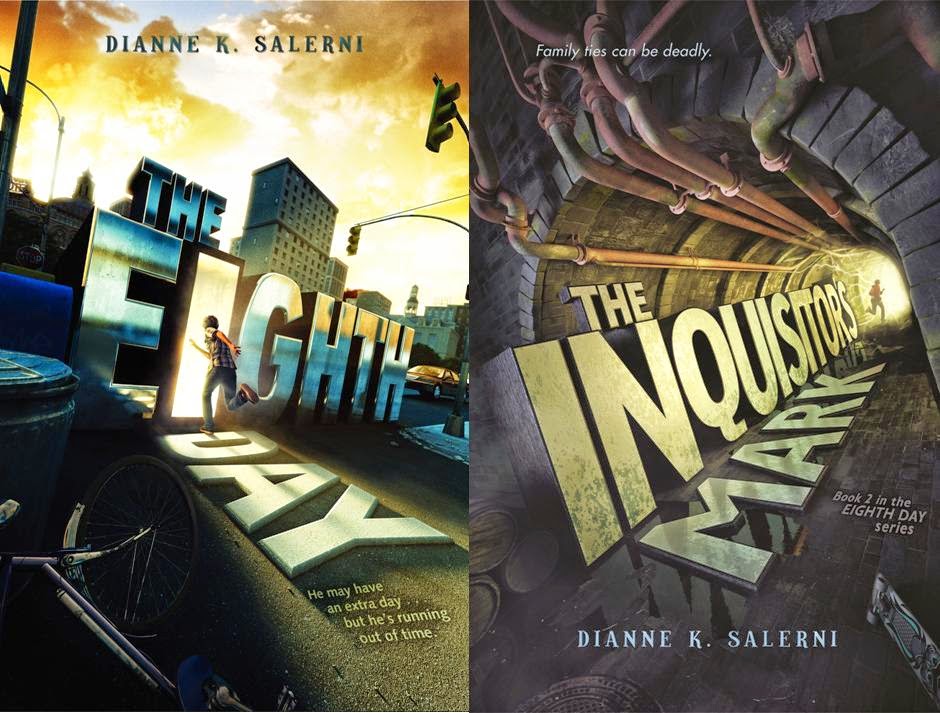